And so, shock of shocks, Lord Steel's inquiry has cleared Alex Salmond of misleading the Scottish parliament with regard to the prisoner John Brown absconding from Castle Huntly. I'm sure we can all look forward to a healthy dose of contrition from Iain Gray for wasting everyone's time with his idle complaints...or perhaps not. 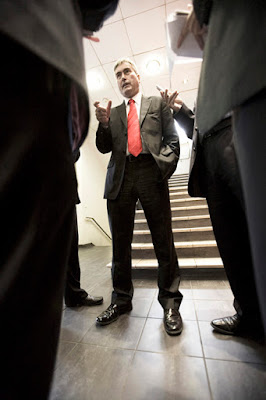 Weary fa' you, Iain Gray!
Ha, ha, this grinnin' poet,
Rejoices that you, Iain Gray,
Invariably do blow it!
When baseless gripes ye wildly bray,
Ye mark how far ye've lost your way,
Wha plants the seed o' your doomsday?
'Tis you yourself that sows it!

He thought that it was Eck's high-noon,
Ha, ha, an' how he crowed it!
But tae Gray's poison Eck's immune!
By now ye'd think he'd know it!
How will this glaikit Labour goon,
Stop his poll ratings hurtlin' doon?
"By meek obedience before Broon!"
At every turn he shows it!

Poor Iain's tongue such drivel saith,
Ha, ha, he ought tae stow it!
Wi' his pal Murphy, puppets baith,
The London line, they toe it!
While "Scottish" Labour puts it's faith,
In Gormless Brown, yon flimsy wraith,
Frae Stranraer up as far as Aith,
The Scots will overthrow it!
Email ThisBlogThis!Share to TwitterShare to FacebookShare to Pinterest
Posted by forfar-loon at 17:25

I didn't hear this on the news earlier. Thanks for that FL.

Perhaps the leader of the opposition would like to try constructively opposing policy instead of working with Lord Foulkes to try to bring down the First Minister at every turn.

Gray really is so second rate.

Surly you are promoting Gray far above his competence level by calling him second rate.

He is not nearly that good.

tris, thanks! Though I owe R Burns a hat tip for his "Weary fa' you, Duncan Gray". Careful with your use of the F-word on this blog too ;o)

dubbieside, you took the words right out of my keyboard!