In memory of Bill McLaren

What sad news to hear of Bill McLaren passing away. He was one of those commentators that was synonymous with his sport, meticulous in his preparation, superbly informed, a wonderful voice and a gift for adding to the spectacle. The Voice of Rugby they called him, and for me and many others he certainly was that. When I jumped about in the mud as a young loon, pretending to score the winning try for Scotland in the World Cup final, it was Bill McLaren's voice I heard in my head describing the triumph. And if and when I reach his venerable age, I suspect it will still be Bill's voice I hear when I dream about scoring that winning try (mud jumping will likely be beyond me by then!). 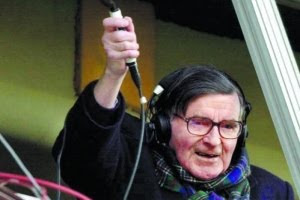 Bill in his element (photo from the Herald)
The BBC have a nice compilation of some of his memorable moments here: Bill McLaren's greatest hits. It's always sad when we lose such a great man, but what a privilege to have listened to him all these years.
Greased Lightbox
→←+-↻

Email ThisBlogThis!Share to TwitterShare to FacebookShare to Pinterest
Posted by forfar-loon at 11:07

I think it's the mark of the man that so many of us have put up a post about him.

Indeed Conan, you'd struggle to find someone universally held in such high regard as Bill McLaren.