The Other Barnett Formula

Yet more sad news, this time from those jackanapes in Australia that thought they could survive without Westminster's munificence. The poor deluded fools have apparently taken to digging rocks out of the ground, smashing them up a bit and then selling the resulting detritus. Of course without the expert oversight of a mandarin from Whitehall the cretins haven't realised that this so-called "ore" that they are totally, utterly and completely 100% dependent on, that they have based their entire economy and way of life on, that underpins their very belief system and is worshipped as a god in satanic rituals, is a...diminishing resource.

And incredibly they seem unperturbed by the price of said ore varying over time in a most volatile fashion! Despite all of this foreboding, some jumped up satrap has got it into his head that their mining industry might be a good thing, and might even be something that could benefit his enfeebled underlings for generations to come!! The BBC reports it thus in a typically craven, left-wing style: 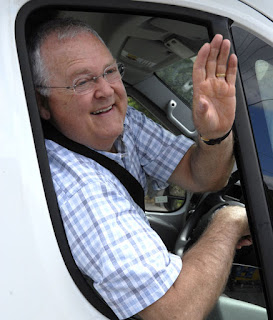 Satrap Barnett, giving what may be a fascist salute to his ululating hordes from
the command centre of his mobile Scud launcher. Honestly, he's just as bad as
Mugabe/Hitler/Mussolini/Stalin/Kim Jong Il/Franco/Ceausescu/Judas Iscariot/...
(delete as (in)appropriate, you may choose more than one answer)

The government of Western Australia has said it is planning to launch its own sovereign wealth fund in a bid to invest earnings from its mining boom.

The state, which has large deposits of minerals such as iron ore, has seen mining revenues rise in recent years.

The surge has been driven by increased demand from China and other emerging economies in Asia.

"The Liberal-National government is committed to ensuring future generations of West Australians have a legacy from this historic period of development, built predominantly on the significant but finite resources available to us at present," the premier said.

Mr Barnett said the details of the fund will be announced during the state's budget, which is scheduled to be presented in May.

Australia's government has its own sovereign wealth fund called the Future Fund.


Why oh why did we let them have separation?
Email ThisBlogThis!Share to TwitterShare to FacebookShare to Pinterest
Posted by forfar-loon at 09:23