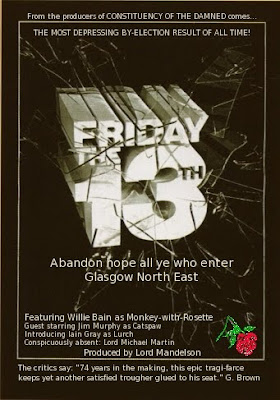 Email ThisBlogThis!Share to TwitterShare to FacebookShare to Pinterest
Posted by forfar-loon at 13:05

Which genre - Tragi-comedy or Horror?

It's all Edinburgh's fault - please Glasgow help yourself to as much dosh as you can trough from the rest of the country signed a worker from Edinburgh.

Thanks tris, it's amazing what fun you can have with a GIMP.

DFD, Labour indulging in divide and rule tactics smacks of desperation to me. They know they have nothing positive to offer so are pursuing a scorched earth policy, trying to set us all against each other. As much as some folk will vote Labour no matter what, Labour want to rule no matter what.