Glorious revolutionary tidings from the Central Conference of the People's Democratic Party of the Workers! Open and transparent elections to the central leadership body of the party have been completed and a successor to the departed Dour Leader has been chosen! 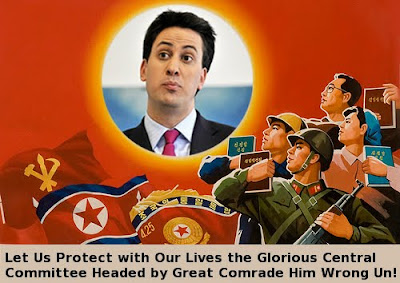 A magnificent poster commemorating the accession of the Dire Leader

Upon the announcement the victor stumbled onto the stage of the Keir Hardie Memorial Palace, seemingly dazed and blinking in disbelief at the affection and trust his comrades had shown in him. Rousing cheers of "Hurrah!", and loud shouts of slogans such as "Long Live David!", "New Labour Forever!", "Devoted Deference!" and "Hang on, who's that?", "Didn't the chimp lookalike win?", "Which idiot counted the postal votes?!" reverberated through the hall.

Such was the unbridled joy at the sight of their new leader that many comrades were moved to tears and stood shaking their heads, scarcely able to believe it was true. Quite spontaneously emotional cries echoed around the hall: "Him Wrong Un! Him Wrong Un!". Him Wrong Un waved back to the greatly agitated participants, returning their vigorous salutes in a most statesmanlike fashion.

Taking revolutionary fervour to new levels, Him Wrong Un dispensed with conventional norms of diction and charisma, and addressed the quivering throng in a unique fashion all his own. He warmly congratulated the participants in the Conference who have devotedly worked for the development and prosperity of the party and its grandees.

He expressed expectation and belief that the participants in the Conference who have steadfastly followed the road of the revolution, remaining single-mindedly loyal to the party, would play their pioneer's role in the revolution and the construction in the future, too, and thereby creditably perform their honorable mission and duty as vanguard fighters of the party. Except for the misguided devotees of the disgraced Beaming Leader and his discredited philosophy of the Third Path to Enlightened Rule Through Public Finance Initiatives, Military Entanglement and Being, Y'Know a Straight Kinda Guy who shall be purged forthwith.

Email ThisBlogThis!Share to TwitterShare to FacebookShare to Pinterest
Posted by forfar-loon at 17:30

Him Wong Un right enough as he is a political wonk leading a machine rather than a band of human free thinkers.
I noticed you dont have a link to http://newsnetscotland.com/
which is gaining membership daily. Will see my first grandson tomorrow with Irish/Scottish nationality.

Cheers CH, what gets me is the genuine belief the Labour masses have that them being back in power would be the best thing for the country! Given the mother of all balls ups that they made of the last 13 years it's a supreme feat of amnesia/brass neck for them to think they have the answers to all our problems.

Don't often look at newsnetscotland I'll confess. When I have looked in it seems a bit too pro-SNP for my liking (but maybe I've not seen enough of it...?). I know the SNP get a raw deal from the media, but I guess I'd rather see a news outfit rise above loyalty to any one party than attempt to fight fire with fire - biased views from different sides of an issue don't give balance!

In the long run I think an impartial news service, loyal only to what is best for Scotland, might be more effective. Not holding my breath for that to appear though!

PS hope you had a good time with your grandson! Congratulations!