As I groggily awakened from my six month hibernation, this year's slew of April Fool's Day japes in the media were all too obvious. I suppose it must be difficult to come up with a fresh angle on it every year, so credit at least to the Scottish media for the clever wheeze of coordinating their efforts this time round.

But seriously, to expect their long-suffering audience to believe that a shambling, inarticulate, hobo-like character, with crazed, staring eyes and a finger permanently set to "jab" is the Labour contender for First Minister! Ah, the scamps! As if that wasn't obvious enough they've even saddled him with the sobriquet, "Iain Gray MSP", a painfully transparent anagram of "Aspiring Yam", a cruel commentary on the sub-tuber intellect of this benighted fellow. 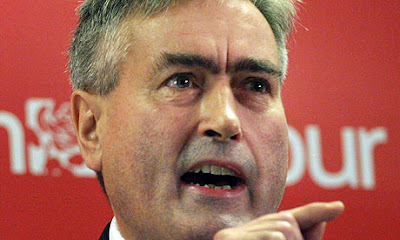 Animal, vegetable or mineral?
Roll on midday when the Labour Party will reveal their real candidate!
Email ThisBlogThis!Share to TwitterShare to FacebookShare to Pinterest
Posted by forfar-loon at 07:29

Welcome back Loon... and with a new look (very nice) and a great post.

I didn't realise that it was an April Fools thing. I thought that they might have been watching a different version from everyone I spoke to, a remix if you will... then I remembered that from the BBC and STV to the Herald, the Hoots of Laughter Man and the Retard, they are, to a man, paid up members of the workers' party.


I had another laugh yesterday when I picked up the Daily Telegraph and read that Annabel had come out streets ahead of the others, Iain Gray had been pretty poor, Tavish disappointing, but that Salmond fellow was pathetic, useless and an embarrassment and he got off lightly because the audience gave him an easy time.

I suppose it never occurred to him that apart from a small number of people in the country who interest themselves in politics, most people tuning in might have thought that it was a school debate with Matron, the Head Boy, the Headmaster and the Janitor taking part.

Thanks tris, nice to be back, although I'm already remembering how blogging used to eat up lots of my time!

I like the school debate idea, but I might have cast Gray as the class dunce rather than the janitor.