The planet Earth has now reached the same position relative to the Sun TWICE since Kenny MacAskill's decision to release Abdelbassett's Murray Mints Megrahi on compassionate grounds. This is a monumentally significant cosmic alignment.

A Labour spokesdroid with serial number 1a1n Gr4y said: "The movement of Megrahi from North Britain's northerly latitude to Libya's tropical climes may well have shifted Earth's centre of mass significantly toward the equator. As the equator is closer to the Sun this causes an extra gravitational pull that may inexorably be moving Earth's orbit inwards, too far and too fast, in a tortuous death spiral that will be the ruin of us all.

We can only speculate at Alex Salmond's motives for damning us all to be vapourised, but figures that we made up suggest that we might enter the Sun's corona in the second half of this parliament thus conveniently getting Salmond out of holding his referendum that nobody wants.

Salmond himself will of course probably flee in his escape pod, cunningly disguised as a wind turbine, in order to pursue his narrow ideology of independence for the universe. A Freedom Of Information request we submitted to ask whether Donald Trump and Rupert Murdoch have seats reserved in the escape pod has been refused on highly questionable grounds. Repent ye voters!

Oh, nearly forgot the positive bit. We are calling for immediate action to increase the number of apprenticeships for parasol makers. I used to be a physics teacher y'know..." 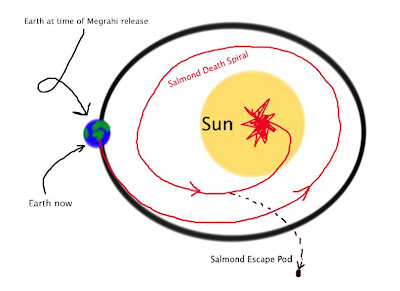 Eerily prescient eh CH? Fair play to Labour Hame though, they managed to out-ridiculous me with that "interview" with Kenny MacAskill. That site is moving beyond parody these days...