The last few weeks have been a blur of activity here in Brigadoon, so time has been short for keeping the blog up to date. To right this wrong it's time for a whistlestop catch up on some recent events...

Many commentators have wondered why only one of these constituencies deserves to have an elected representative. I find myself similarly confused, unless of course it's simply Labour trying to rig things to maximise their chances of success. Surely not, I hear you sputter (ahem). It provides an interesting twist on our culture of loyalty. Usually loyalty is prized (air miles, Clubcard/Nectar points, never change your football club, etc.), but the message to the people of Glasgow NE from Labour HQ is loud and clear: yes, thanks for voting for us since forever, but no, during these times of recessions and looming job cuts you don't really need an MP to speak up and fight for your interests do you? Actually, given how little Labour MPs have done for such constituencies over the decades I don't suppose they'll be missing much.

It was also interesting to note reports of the Labour leopards retaining their spots during the Norwich campaign. Apparently some Labour activists had been whispering unfounded rumours about the sexuality of the successful Tory candidate, Chloe Smith. They really haven't learned from the McPoison affair, have they? Where will they stop in their pursuit of power? Where is the boundary for these people? Is there anything they won't do/say in order to keep one more of their lobby fodder in place? Utterly repellent. The only saving grace is that their shame is being reported and will hopefully be their undoing.

Imagine the scene. Your boss tells you that you will be getting a bonus. Do you: (a) save/invest all the extra money; (b) spend some of this extra and save/invest the rest; (c) spend all of your bonus; (d) fritter away all of your bonus, increasing your commitments so you become utterly dependent on it even though you know it won't last forever?

Surely the sensible option is (a), or perhaps (b) if something important is needed urgently. Conversely the stupid answer is to choose option (c), and the insane answer is option (d).

So why have Labour/Tory governments consistently chosen the insane option (d) for the last few decades? The plain and simple truth is that they have used the oil money to mask the problems in the British economy. By throwing good money after bad they have squandered this natural resource, while putting off any "tough choices" (Brown's desperate new catchphrase) until after each successive general election. And of course, as long as the oil lasts the mythical tough choices can be blissfully forgotten about...

Whilst this myopic denial is galling enough, it beggars belief that Labour criticise the SNP for suggesting an oil fund. "We can only spend it once", they say. Hmm, or to state Labour's position more accurately, we can only waste it once. The important thing to note here is that if we invest the money wisely, only spending the interest earned, we can actually spend more in the long run. "But the oil price is volatile, it's running out anyway." Erm, yes, but isn't it still valuable? In a good year more goes into the oil fund, in a bad year less. Isn't it better to use it wisely than squander it by papering over the cracks in the economy. And when the oil does finally dry up what would you rather have? A reformed, efficient economy with a decent nest-egg to help us in the future, or an artificially inflated expectation of the strength of the economy and a sudden inability to pay for public spending?

Congratulations to Baron Mandelson of Foy in the county of Herefordshire and Hartlepool in the county of Durham, First Secretary of State, Secretary of State for Business, Innovation and Skills and Lord President of the Council (serving suggestion: breathe now) on finally attaining the office of Prime Minister. It's the best of all worlds really: Gordon is allowed to keep the title and house and serves as a useful target for the nation's anger, while Mandy quietly gets on with running the country without troublesome irritations to distract him, like actually having to be elected to the government. The full list* of committees that the Mandynator now bestrides is available here. 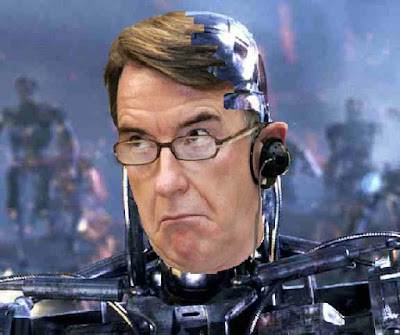 "Implement my policies if you want to live"
* Correct at time of posting...

Email ThisBlogThis!Share to TwitterShare to FacebookShare to Pinterest
Posted by forfar-loon at 09:54