In these troubled times what is exercising the little grey cells of the chattering classes of Scotland? The prospect of shipyard closures on the Clyde? The imminent loss of hundreds of jobs at two of Diageo's plants? No dear reader, worthy though these stories might be of attention, a far graver matter faces the nation. Prepare yourselves. Forty-eight of our MSPs didn't bother to go and listen to the Queen giving some speech or other. Alas, whither Scotia?! 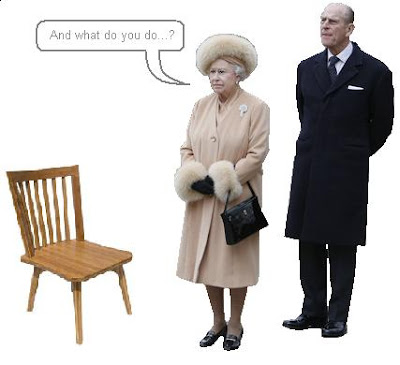 Treachery though it be, I'll confess that I didn't bother to listen to Her Majesty, but I'm going to go out on a limb and guess that "her" speech consisted of the usual platitudes and banality that she's restricted to in order to remain apolitical and avoid giving offence (Big Phil on the other hand...). Happy to be corrected on that point mind, please relay to me any great profundity that she imparted to us plebs using the comments below.

So why the stushie? Why is everyone proclaiming this to be a day of shame for the parliament? Whatever happened to that idea of Scotland building a modern, egalitarian, 21st Century democracy? Or the pride and glee we all shared when "A man's a man for a' that" was sung to the Queen at the official opening? Straight out the window! Get a grip Scotland!
Email ThisBlogThis!Share to TwitterShare to FacebookShare to Pinterest
Posted by forfar-loon at 17:18

Auch hopeless poll lol. You have to put something in it about the MSPs who decided not to attend the official chamber ceremony to honour the 10 years since the official opening.

Fair dos subrosa, but you know what it's like when you have a good rant festering away inside, it has to come out! I agree a snub to the parliament is worse than snubbing the Queen, but I think we'll have to agree to disagree on whether the skivers are guilty of that. Some perhaps, others less so.

For the record this outburst wasn't aimed at your blog, more the Linklaters and Cochranes of this world and those that comment so deferentially when it comes to royalty (incidentally isn't the English language amazing, how "rane" in "Cochrane" can be pronounced "sucker"?).